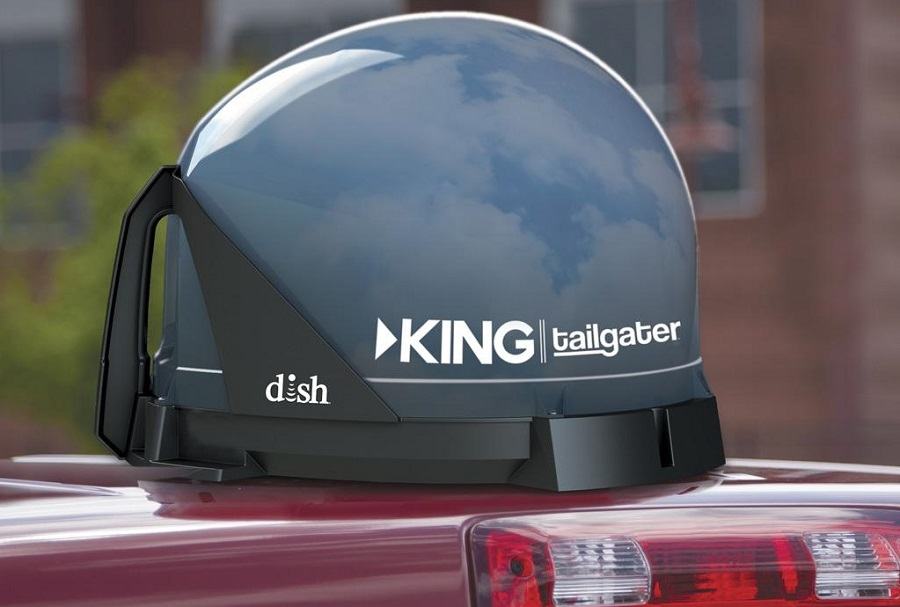 Hey! By the way… any links on this page that lead to products on Amazon are affiliate links and I earn a commission if you make a purchase. Thanks in advance for your support! Once football season starts, people are torn between watching the game or rearranging plans so they can be home for kickoff. If you’re tired of living your life around a sports game, then maybe it’s time to have your cake and eat it too! How, you ask? By using the KING Portable Satellite TV Antenna to attach to your RV.

Without further ado, let’s get into the review.

Since this is an automatic-aiming antenna, you never have to worry about trying to find satellites. All you have to do is take it out of the box, hook it up and you’re good to go.

You do have the option of permanently affixing the device to the roof of your RV without needing special brackets. However, if you wish to mount the antenna to your truck’s cab, you will need to purchase appropriate brackets separately. You do have to sign up for a pay-as-you-go plan from DISH. With that plan, you are only going to be paying for the months that you wish to use the service. Once the season ends or your show is in hiatus, you can cancel the service without cancellation fees.

Of course, it’s worth noting that if you already have DISH at home, you can connect the Solo DISH HD receiver (required but sold separately) to your account and only receive one bill.

What People Are Saying

We wanted to see what customers were saying about the KING Portable Satellite TV Antenna so we took a look at the reviews. For the most part, the reviews were pretty good. A lot of people were pleased by the overall design of this unit.

One customer said they originally had a tripod dish and it was a hassle setting it up and taking it down every time they wanted to use it. However, with this antenna, they just put the unit outside and it locates satellites by itself. Within 15 minutes, they are able to watch their favorite shows with very little set up.

Other customers said that they really appreciated how easy to follow the instructions were. People commented that they weren’t able to get the HD channels, but since they were camping and weren’t watching television like they would at home, this wasn’t an issue.

A few people did mention that you have to check your local satellite listings to know what channels you’ll get because the channels may not be available everywhere.

Although the majority of consumers had a lot of great things to say, there were some people who were not pleased with this antenna. The most common complaint people had was that they could never get a good signal.

Not only that, but people said the antenna wasn’t able to connect to the HD satellites and they found it very frustrating. One person said they travel across the country all the time and the reception out west is “lousy.”

A few people have said they felt like the antenna they received was defective because it would work with some transponders and not others. People said they hooked two TVs up to the antenna and while one TV would work perfectly fine, the second TV only got limited stations and they couldn’t get each TV to work independently.

Trying to find the perfect antenna to use on camping trips or even off-the-grid living can be a bit of a challenge because there are so many great products on the market. However, if you want something that is easy to set up, allows you to pay as you go, and can be hooked up to two televisions, then the KING Portable Satellite TV Antenna is probably the option for you. We love this antenna because you don’t have to worry about trying to find the right satellites because this antenna does that automatically. Also, we love that can work with several DISH HD receivers.

If you’re looking for a great antenna that is going to give you the ability to tune into your favorite shows wherever you are, the KING Portable Satellite TV Antenna is a good option… If you have DISH services.

We’re not a big fan of the price of this antenna, or the fact that it’s a pay-as-you-go type of deal. That may not be a problem if you only want to use the antenna for the season, but in our opinion, the cost of the antenna, plus the pay-as-you-go fees, it can add up. Now, if you have DISH, you can add it to your existing DISH bill.

In short, we like this antenna because it’s simple to use and easy to set up, but unless you already have a DISH account, we’d skip on this antenna and try something else.

How to Ground a TV Antenna Correctly

How to Hook Up TV to RV Antenna